US Assistant Secretary of State for European and Eurasian Affairs Victoria Nuland has resigned from her post. Speaking to Radio Sputnik, Russian political scientist Alexander Konkov said that her departure is highly symbolic, and could presage important changes in the Trump State Department’s attitude toward US-sponsored regime change operations.

Nuland had her last day at the State Department on Wednesday; her name was just one among a long list of senior Obama-era diplomats who resigned from their posts this week, many of them ‘expressing concerns’ about serving in the Trump administration’s State Department, according to the New York Times.

In Russia and Eastern Europe, Nuland will best be remembered for her role in the political crisis which rocked Ukraine beginning in late 2013, and culminated in the US and EU-backed Euromaidan coup d’état in February 2014.It was in a leaked telephone conversation with US Ambassador to Ukraine Geoffrey Pyatt from February 4, 2014 where Nuland made perhaps the most memorable remark of her diplomatic career, saying “F*ck the EU,” referring to Brussels’ hesitation to overthrowing the elected government in Kiev outright.

But even though the three little words were what was best remembered from the leaked conversation, the more important context which has since been forgotten was Nuland and Pyatt’s very casual discussion about who they wanted to take the reins in the new government in Kiev (note that the conversation took place several weeks before President Viktor Yanukovych’s ouster on February 22, 2014).

Nuland and Pyatt chose former boxer Vitaly Klitschko, who would go on to become mayor of Kiev, and Arseniy Yatsenyuk, who was affectionately referred to ‘Yats’, who soon became Prime Minister. “Yats is the guy…” Nuland quipped.

The two US officials also talked up the benefits of having Yatsenyuk and Klitschko ally with Oleh Tyahnybok, the ultranationalist Svoboda Party leader openly associated with Ukrainian Neo-Nazi groups. Far right groups played a key role in the success of the Maidan coup, duking it out with riot police and taking over key government buildings following President Yanukovych’s ouster.

Around the world but especially in Russia and the former Soviet space, Nuland became an iconic figure, famous for the images of her passing out cookies in Kiev during the Maidan protest. The photos quickly became a sensation online, and are regularly used by those fearful of the neocons’ regime change operations around the globe.

In late 2014, Nuland admitted that the US had spent a total of $5 billion for ‘democracy promotion’ efforts in Ukraine since 1991, something Russian officials speculated was a code term for regime change efforts. The assistant secretary of state brushed off the allegations, telling CNN that “that money has been spent on supporting the aspirations of the Ukrainian people to have a strong, democratic government.” She even denied that the money had been spent supporting the Maidan protests, calling them and the coup that followed a “spontaneous movement.” 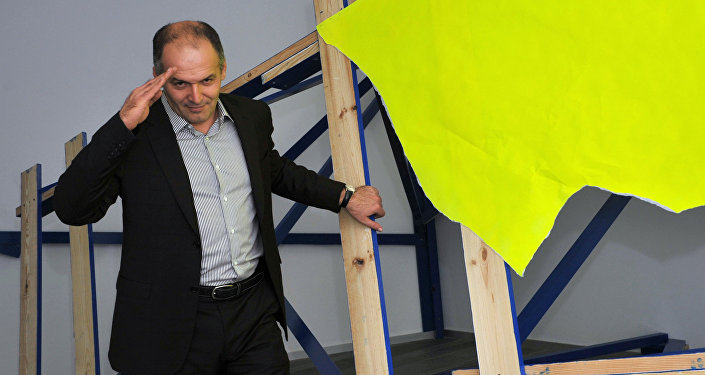 Ukraine May Have a New President in Waiting, But He’s Another Oligarch

Nuland is married to Robert Kagan, a leading neoconservative who co-founded the Project for a New American Century, is a member of the Council on Foreign Relations, and several influential Washington-based think tanks. Kagan angrily left the Republican Party in 2016 and endorsed Hillary Clinton for president. Clinton handpicked Nuland for assistant secretary of state for European and Eurasian affairs post during her own tenure as Secretary of State.

Speaking to Radio Sputnik, political scientist Alexander Konkov explained that “for Russia, the post-Soviet countries and the countries of Eastern Europe, Victoria Nuland’s departure was symbolic.” In fact, he said, Nuland’s exit “signifies the famous promise of the new president of the United States to stop exporting democracy. In other words, the US must have a more pragmatic policy – not focused, as in previous years, on the export of so-called democratic values.”

Nuland, Konkov noted, is seen “as a rather odious figure, and I think that her image, even long after her departure, will long be associated with interference in the internal affairs of other states.”

“Her image passing out cookies on Maidan Square will be remembered for a long time,” the expert added.

Emphasizing the importance of the post vacated by Nuland, Konkov stressed that Moscow will now be waiting impatiently to see who takes her place in President Trump’s State Department.Trump chose former ExxonMobil CEO Rex Tillerson for the position of Secretary of State. His candidacy has been approved by the Senate Foreign Relations Committee, and must now be approved by the Senate as a whole. According to Konkov, Tillerson has a good shot at getting the top job.

“Judging from the meetings in the US Congress, he’s able to find a common language with senators and members of the House of Representatives. And we probably won’t have to expect any scandal here, although Congress still has questions for Tillerson. The answers to those are of interest to us as well.”

As for Nuland, Konkov suggested that her departure probably means that she will retire from the diplomatic service. Between 2011 and 2013, prior her appointment to the job of assistant secretary of state for European and Eurasian affairs in September 2013, Nuland served as a State Department spokesperson, creating several gems in her exchanges with the media, particularly with AP reporter Matt Lee.

Hopefully, if Nuland does retire, it will be for good, since it would allow the would-be targets of the neocons’ regime change operations to at least temporarily breathe a much-needed sigh of relief.